We are having another look at
sewing cards - this time boxed sets.
These sets are all used and
are as found.

The box set below has been dated
as circa 1910 (according to Darlene J.
Gengelbach, the author of Encyclopedia of
Children's Sewing Collectibles - identification
and values). It is made by Parker Brothers (Inc)
Salem Mass. U.S.A. There should be 10
cards in the set and the set below has its
original 10 cards. 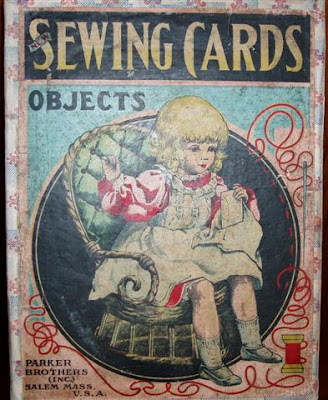 The pictures are pinpricked and quite detailed.
I would suggest that to sew these cards, the young
child would have been quite skilled. The set
shown in the book "Children's Sewing Collectibles"
are of animals whereas this set is - Objects - as
stated on the front of the box. 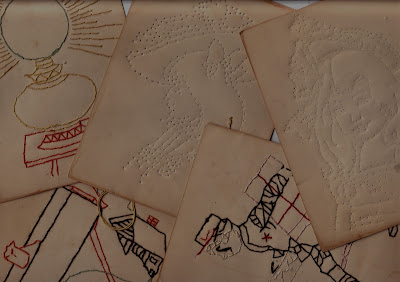 First Steps in Sewing - Germany
There are no further clues as to maker and date but
I would say circa 1910's. 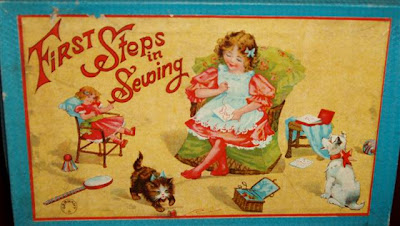 There are only five cards in the box and I would say
that there would be some missing. Again, the cards
are pinpricked, small and detailed. 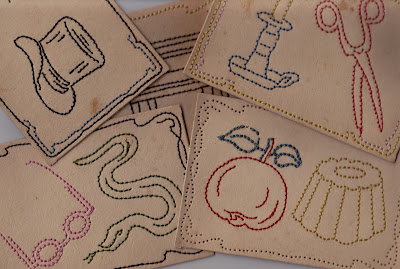 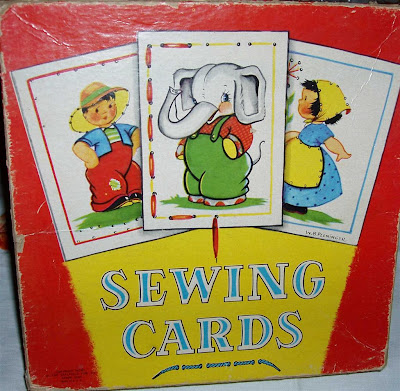 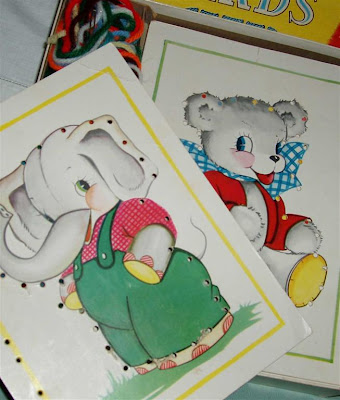 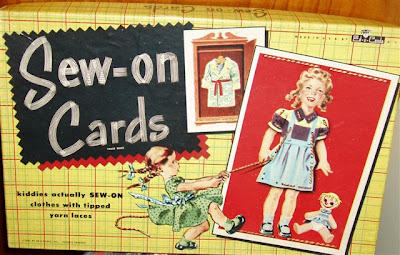 This set has a different approach in that you sew "card" clothes on
to a cardboard doll.
The set is also shown in the book "Children's Sewing Collectibles".
All dolls and clothing are still with my set but two
of the laces are missing. It has also been added to
with another two sets of sewing cards from other
sets of which I have yet to identify. 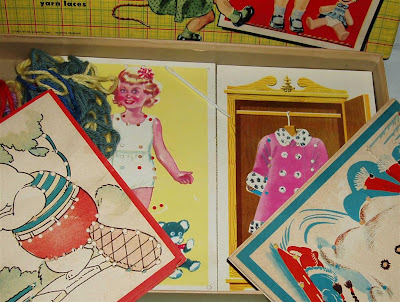 Below - Sampler Sewing Cards - box reads "Copyright
MCMLIV (1954) by The Saalfield Pub. co. Akron O.
Made in U.S.A.
There are 12 Sampler Designs, 4 Balls of Yarn,
Tapestry Needle, and Illustrated Instructions. 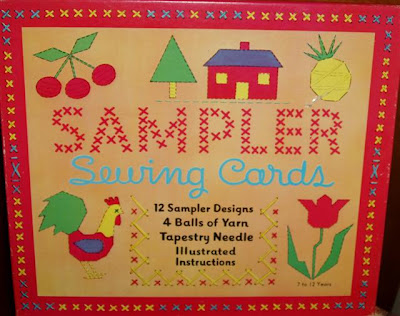 There are lots of designs to cross-stitch.
In this set, there are 10 cards, however, it has been added
to and there again, I have yet to identify all of the
other cards. 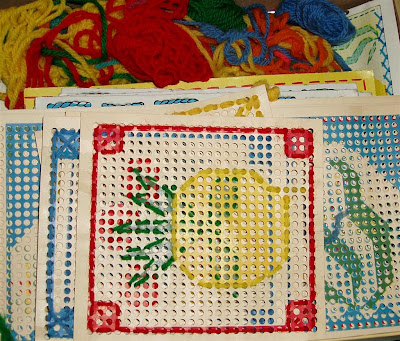 Next time, I will have a little look at embroidery
sets.

Posted by crazyhaberdasher at 8:01 pm 2 comments: Links to this post 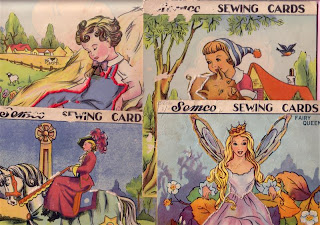 Sewing cards are a great way to start
a young child on the road to learning to
sew. 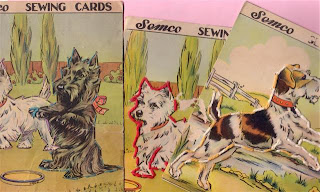 Semco in Australia, produced simple,
perforated cards with fun colourful designs - such
as animals and nursery rhymes and more.
See above and below - adorable
dogs, Wire Haired Terrier, Scottie, and
Westie. 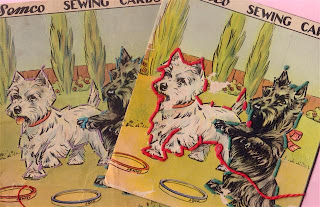 Semco - from Stanley E. Mullen Co. was commenced
in Melbourne, Australia in the early 1900's and
produced paper transfers as well as
threads, embroidery patterns, etc.
The business was transferred to a new
premises in 1923 at Semco Park,
in Black Rock, Victoria, Australia. Much later,
the Company moved to Sandringham in 1978.
In 1983 it sold to Coats Patons acquiring
the assets and the name.

Below is one example of the doilies
that were available from Semco ready
to embroider - a delightful Crinoline
Lady Novelty Set. 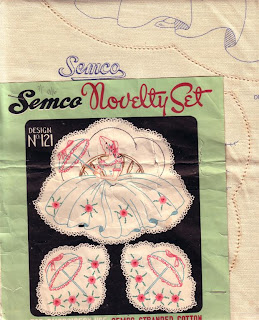 There will be more sewing sets to follow soon.

Posted by crazyhaberdasher at 10:23 pm 4 comments: Links to this post

This time I am taking a look at
plain sewing sets.
But just because the outside is plain,
doesn't mean that the inside would be -
although the floral pattern of this
set is really quite sweet. 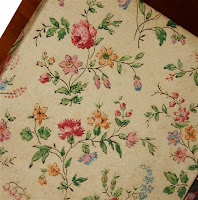 Inside, we find a quite complete embroidery/mending
set. With no brand name on the outside of the box,
we only have the details found on the thread cards
telling us that it is Made in England. The silk thread
has the Duldarn brand on it. 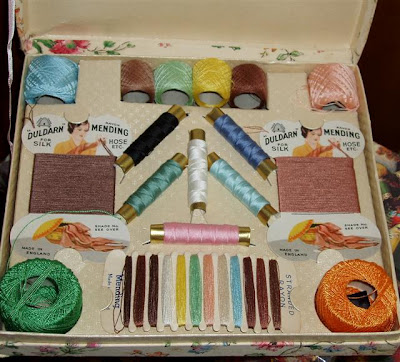 This set has had little use.
It has a drawer in the front to hold the work in
progress - currently empty.
The brand name on the thread card reads Sewswell - Menda.
There is a sweet little button card of four green buttons, a
Blue Star Brand Finest Quality Needles packet, scissors, ribbon,
threads, thimble, fabric, and safety pins. This set
is also Made in England. 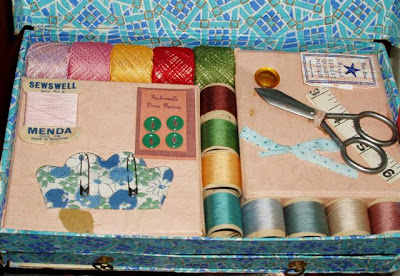 This set has two drawers in the front which holds
two children's handkerchiefs, - a rabbit design and
a crinoline lady design -
ready to be embroidered.
Inside, we find that this has had a lot more use than
the other sets. There are knitting needles, crochet hook,
thimble, many "Glister" thread spools, rayon
embroidery threads reading Swinden (Fancy Goods)
Ltd. Redditch, England,
and a blue "doiley" ready to embroider.
There is a gold foil oval pasted inside the lid
which reads "Sewinden" (yes, with an e)
Product - Made in England 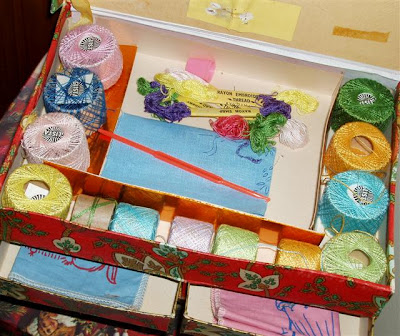 I would say that this set has been added to.
Although it is almost complete with all of
its thread spools, thimble, pincushion, safety
pins, paper tape measure, "Floral" needle
packet - English Made, Best Quality Sewing
Thread cards - Made in England, and perhaps
missing the scissors. There are other
embroidery thread cards on the inside
of the lid, a Silcarn Mending thread card,
and Vicars Salome Tapestrie rayon thread,
plus The Albion AMG sewing and mending thread. 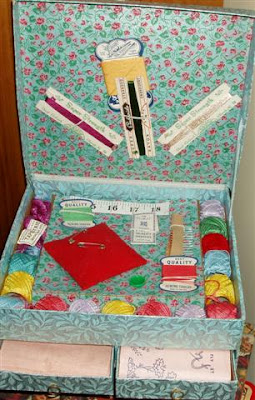 This again, has two drawers in the front
of the box holding cloth to
embroider and a paper pattern and
stitching instructions.

Next post, I will be taking a little look
at sewing cards.

Posted by crazyhaberdasher at 11:39 pm 7 comments: Links to this post

Hi! to my fellow soul-sisters!

crazyhaberdasher
Please respect Copyright. I retain copyright on all of my own written work and my own images........ Thanks everyone! .............. I am a collector of all things to do with sewing, knitting, crochet, etc., some may say I am obsessed or possessed! I can also knit, sew, crochet, paint and play piano when my hand allows me. (But not all at the same time!)